Why are we excited? Because Top Chef has been one of the few reality competition series in which Asian Americans have been consistently dominating! From Lee Anne Wong from season one to Shirley Chung of season eleven, APA chefs have been making a strong impression in almost every season, including taking Top Chef wins in seasons 3 (Hung Huynh), 9 (Paul Qui), and 10 (Kristen Kish)! At Kollaboration, we celebrate those who follow their passions, and it’s so very exciting to see members of our community pursue and prove their passions to the world on the national stage.

To get ready for the upcoming season, let’s take a closer look at the three APA cheftestants that we’ll be rooting for: 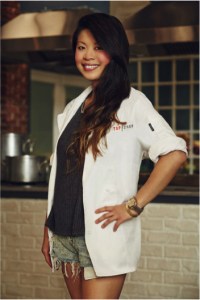 Mei Lin is the sous chef at Los Angeles’ ink., the critically acclaimed avant-garde restaurant of Top Chef season 6 winner Michael Voltaggio. Named one of Eater’s 2014 Young Guns, this Michigan-native brings with her a strong pedigree, including experience in the kitchens of Marcus Samuelsson and Wolfgang Puck. Chef Lin also collaborated on a pop-up concept at last year’s 626 Night Market where she hawked pork belly egg rolls, congee, and Chinese churros (mildly NSFW)! 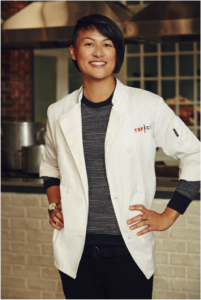 An avid traveler and learner, San Francisco chef Melissa King is a Los Angeles raised UC Irvine grad who graduated at the top of her class from the Culinary Institute of America in NYC. Moving to SF after graduation, she has trained in three different Michelin starred restaurants under Iron Chef and James Beard Award winning chefs, where she developed her classical cooking style. Currently a private chef with San Francisco based startup, Kitchit, Chef King delights her clients with Michelin quality food right at their houses. 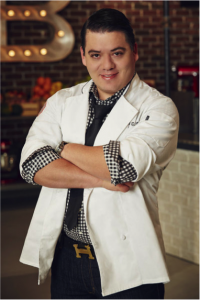 Chef and owner of Mexikosher, a Mexican/Kosher restaurant in Los Angeles, Chef Tanabe has been making a name for himself as a talented and eccentric Latin chef who introduced the Jewish communities of LA to Mexican Cuisine. Half-Japanese and Half-Mexican, Chef Tanabe grew up in Mexico City and trained in several acclaimed LA kitchens before opening his own restaurant. In addition to being this season’s Latin Specialist, Chef Tanabe will also be one of the few cheftestants with reality show experience, having previously won an episode of the Food Network’s Chopped.

Tune in with us when Top Chef Premieres on Wednesday October 15 at 10pm/9pm (central)!