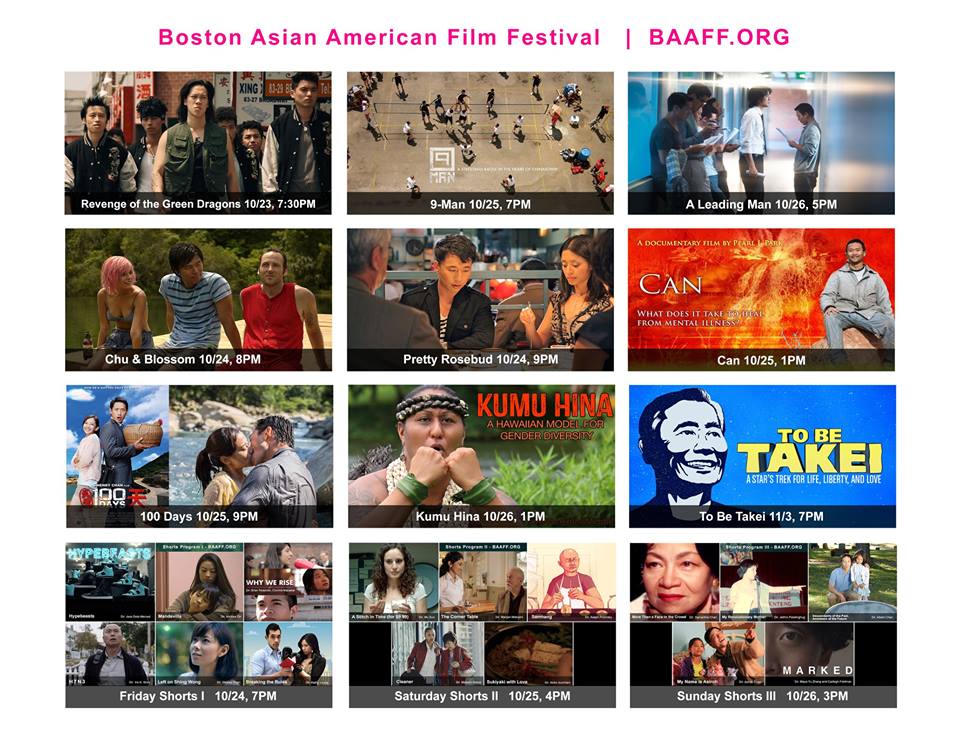 Kicking off with the New England premiere of “Revenge of the Green Dragons” on Oct. 23 at the Brattle Theater, the Boston Asian American Film Festival (BAAFF) welcomed the movie’s directors Andrew Loo and Andrew Lau and lead actress Shuya Chang. Other actors from the movie appeared at the premiere, including Shing Ka, Celia Au, Carl Li, and Richard Lam. The festival ends on Oct. 26 with the East Coast premiere of the drama “A Leading Man,” with a visit from the movie’s director Steven Kung.

The centerpiece film, the documentary “9-Man”, tells the story about the street ball battles of the Chinese-specific game nine-man played in Los Angeles’ Chinatown. After the screening, viewers can attend a Q&A with the director and producers. The other films shown throughout the weekend include documentaries, short films, dramas and comedies. The Oct. 24 Shorts Program will include the Wong Fu Productions short “Left on Shing Wong” and a Q&A afterwards with director Wes Chan. All of these films are still not available elsewhere, as they make their rounds through films festivals.

“All of these films are not in theaters, they haven’t hit distribution,” Connie Chan, BAAFF assistant festival director said. “We’re the Boston premiere, so people won’t be able to see it anywhere until after the festival.”

Although the eight feature films and the shorts program are worth looking forward to, one of the biggest draws of the 2014 BAAFF comes after the official festival ends. On Nov. 3 at the Somerville Theater in Davis Square, BAAFF will host a special presentation of the biopic “To Be Takei” with a live Q&A with none other than George Takei himself.

“George and Brad Takei are coming, but I don’t think Brad will be on stage but George will definitely be on stage,” Chan said. “That’s a really good opportunity, and he was really humble (when I talked to him) and I can’t wait to meet him in real life.”

BAAFF is a volunteer-run off-shoot production of the Asian American Resource Workshop, and Chan said it takes a lot of work for the festival to get stars like Takei to attend the festival. It takes many volunteer hours and emails to get the stars to Boston, as in past years when BAAFF has featured appearances from other A-list Asian Americans like director Ang Lee, playwright David Henry Hwang and actor James Hong.

“As an attendee, no one really knows how a film festival really operates,” Chan said. “It seems like you just get a film, then someone will come out (to Boston), and then you pay to go see the movie, and ta-da that’s it.”

Chan said the reality is not that easy. First BAAFF holds an open call session online for filmmakers to submit films, and gives BAAFF the chance to go out and find other films to show in Boston. The search for films begins pretty much after the current festival ends because a festival coordinator and team screening committee has to go through hundreds of films, grading each before deciding on the ones to show.

“We get a couple of people to just research,” Chan said describing the film finding process. “Films, online, people who may know people who have been doing film or in the process of doing film. We start seeking it the year before, hoping that next year we can screen it at the film festival.”

BAAFF also goes to other Asian American film festivals to look for movies that the East Coast or Asian Americans can relate to. Once chosen, they have to fit them into the festival schedule so none overlap incase attendees want to watch every film.

She said that BAAFF tries to show all types of films, showing documentaries, features, drama and music videos. The process to pick the films takes two or three months, followed by contacting the filmmakers to make sure BAAFF can show these films to the public without crossing any distribution rights or arrived in theaters. Waiting for the legal okay, the line up is finalized and they start contacting venues and making sure all needed forms are signed. This process, according to Chan, can take weeks to finish. The BAAFF team has about thirty core staff members split into different teams to help the different departments.

“We are all volunteer based, even our director and I,” Chan said. As she compared the current staff to the one she knew as an intern, “we’ve been growing a lot; it all started with six people when I started four years ago (as an intern).”

As the BAAFF team focuses more on the festival, Chan considers what sets the the Boston Asian American Film Festival apart from others. She said BAAFF looks to tell the stories of every film, and wants them to resonate with the Boston community whereas some West Coast films Bostonians might not identify with as strongly. More importantly, Chan wants the story to have an impact on the audience.

“We want these movies to inspire,” she said. “We want people to be able to make a film or tell their stores, or even inspire them to go back home and talk to their mom, or their family.”

As the festival prepares for the 2014 festival, Chan said though the films may resonate more with Asian Americans, a more diverse audience is welcome to come.