Weighty topics of mass violence and bullying have unfortunately become all too prevalent in present-day American life.  Office Hour, playwright Julia Cho’s latest work which premiered earlier this month at South Coast Repertory, tackles these complicated issues.  The play opens with three English faculty members discussing a troubled college student named Dennis (Raymond Lee). Dennis, a sullen outcast, has alarmed the faculty with his violent and pornographic writing—and ultimately gives rise to a fear of him committing a campus shooting. One teacher named Gina (Sandra Oh), ultimately invites Dennis, to her office hours to see if she can get through to him.

Inspired by the tragic events of the 2007 Virginia Tech shooting, the play dives into very serious issues of mental illness, racism, mass violence, and the immigrant experience, and more importantly, how these themes are deeply intertwined with the fact that both Gina and Dennis are Korean-American. This is clear from the opening scenes, where Genevieve (played by Sola Bamis) and David (Corey Brill) both suggest that Gina should be the one who approaches Dennis, not only because she is his current teacher, but also because of their shared cultural background. Dennis, who wears dark clothes, hoodies, and black, opaque sunglasses, is unmistakably an outsider—but the play eventually reveals that it’s not for the reasons you may think.

“I think part of the reason why Dennis is less apprehensive to open up to Gina is because of the shared background,” Lee said, “and I think the sheer fact that Gina mirrors Dennis’s appearance and culture is important to the play.  There needs to be an affinity so people are comfortable going to a place of opening up. Especially if Dennis is a person that has been victimized by people for his appearance.”

Oh echoes these sentiments, and said “There is a deeply introspective and brutally honest look at both characters [Gina’s and Dennis’s] sense of loneliness and self-loathing that comes from a cultural place.  That is definitely held by the character of Dennis, and the effect of being invisible culturally and emotionally is something that speaks to this play.”

Their shared cultural identity, which initially serves as an unspoken icebreaker, clearly develops into something more. Lee, like Dennis, has also experienced bullying because of his appearance and noted that the feelings of alienation he had “…never leave you. Those feelings of alienation, the feeling of being made fun of for having done nothing other than the way you look, the way you’re born?  Those feelings never leave you. Dennis has dealt with that form of isolation his entire life and he didn’t acclimate so well, and it ends up cementing into something very ugly. and he ended up having a lot of aggression towards these people that treated him unfairly. It became a real cyclical spiral, and he spiraled down into a place where he’s borderline suicidal. Yes, we can all relate to these things. But for Dennis, I took it in a much more personal and drastic way.”

Oh, who has experience playing strong, and emotionally complex female characters (such as her decade-long stint as Cristina Yang on Greys Anatomy) also took a very personal approach to Gina. “The style of this play and the subject matter of this play is very different [from some of her other roles]. It’s about gun violence, and mental health, and all these things.  But honestly, I approach each of these [roles] in a similar way with similar seriousness. I want to play a character that can speak to young women and tries not to spend all their lives thinking about boys too much. So that kind of intention is the same within the kind of intention with which I approach Gina in “Office Hour” and in her efforts to reach Dennis.” 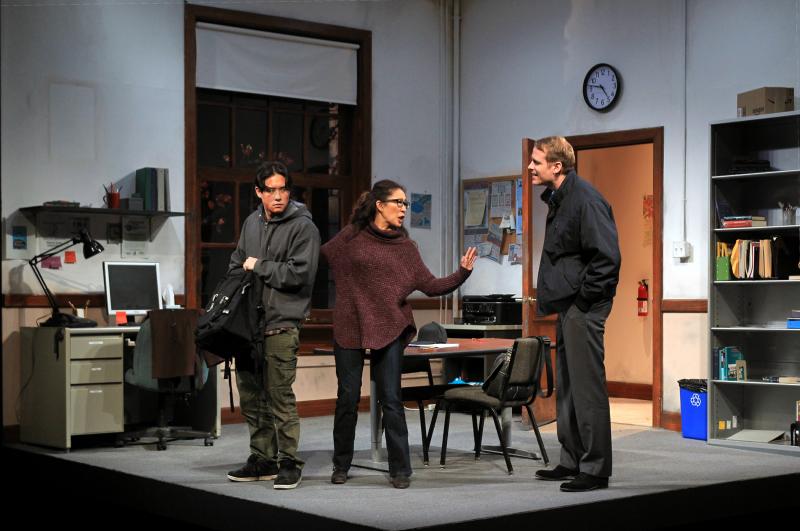 Lee, who is also Korean-American, said he relates to Dennis in various ways. For him, understanding Dennis’s character was a full-time job.  Along with reading up on various manifestos and blogs from other proponents of mass shootings, “I had to dig into my own life and think about the times that I’ve been mistreated and bullied. As an actor, you start having to use your imagination and you have to imagine the way you’ve been treated and the way they’ve been treated. Then, you start to let that build inside of you, and you water it like a plant every day at rehearsal. You go home, and you feed it some more. Then it starts to grow, and the next thing you know it starts to have a life of its own. I kind of take it upon myself to have a responsibility to show the audience every night, as truthfully as I possibly can, what these guys were going through right before the incident. It’s a process that involves a lot of searching, and at the end of the day I have to love these guys. I have to love Dennis with every part of me to show the humanity and not just a killer.”

Oh goes on to say that “we [her and Raymond] are both Korean-American. It just is, and it’s shit you don’t have to talk about but I know that’s what ties Ray and I together on stage.  And it ties Gina and Dennis together very strongly too. Gina understands Dennis because she herself is a broken person, and she understands Dennis in ways that I think Genevieve and David, who Sola and Corey play, might not.”

While the relationship between Dennis and Gina is certainly helped by their shared cultural background, Dennis and Gina’s complex feelings are part of a bigger picture within the AAPI community.

Lee discusses this more in depth. “I think in Korea, and along with a lot of Asian cultures, silence is a virtue. You don’t react, you stay patient; you kind of just take it in, and it ends up coming out in really ugly ways. Along with Dennis having his issues of being made fun of and whatnot, there is also the expectation to keep it all in. So that can really hurt a person. And that is a cultural aspect and a cultural effect.”

“The great thing about this play,” Oh says, “is that you could open up fields of the immigrant experience.”  The shared bond between Gina and Ray comes from their shared, immigrant ancestry—which would still exist regardless of their particular ethnicity/race. “But in this production, Gina and Dennis (and the playwright as well) happens to be Korean-American.  It has a very specific flavor that we bring to it, as actors.” 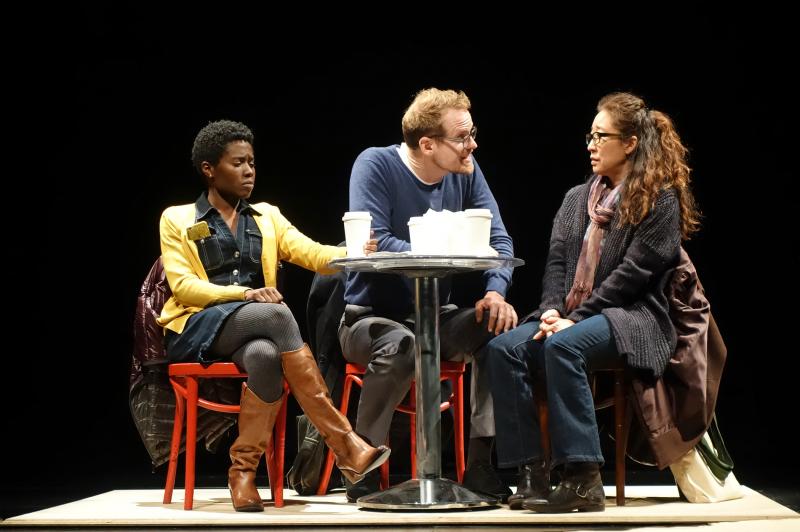 Lee reflects on one specific moment where Dennis and Gina enact an imaginary phone call. “Gina plays Dennis’s mom in a kind of roleplay. This is the scene that cracks open Dennis the most because of the way Gina talks to him—it’s like his mom.  And that authenticity has to do with being Korean.  There is a lot of guilt there that comes from a combination that values men to be silent in the household and also values success.  I believe Julia, she’s brilliant, wrote it specifically to tell a Korean-American story. Especially…just as an Asian man, there’s all these things in the media now that de-masculinizes Asian men all the time.  Look at all these dating apps. Asian men are the least desirable, and that is a direct result of media and a direct result of what’s been said to us growing up.”

“To see a young, Asian male character, who is in university, filled with rage is super important to see.  Because it is a part of who we are, and a part that we need to deal with, and I think it is a part that cannot be ignored” Oh said.

Thoughtfully, Lee mentions something similar.  “We may be the last generation of Korean-Americans to have this specific story.  We all have stories.  I think we’re an amazing group of people and it would be great to be remembered as such: as a really resilient group of people.  So, I just really want to urge the storytellers to step up and do it. and make it a responsibility on your own to do it.”

Beyond the complicated issues that the play sheds light on, Oh finds Gina to be a role extremely fulfilling as an artist and an actor. “Being so present doing this play is constantly reminding me of why I do work, and why I choose to do the work that I do. You don’t always have a choice. and I’m extremely lucky that I do have a choice. I am very conscious of that. and I feel that if work is not as important as this play, and is not as great as a character a Gina, then this is the only kind of work I am interested in doing. There could be a million of those movies that have us in it or don’t have us in it [authors note: Ghost in the Shell, anyone?] and I just can’t follow that.  I’m going to bust my guts out for 250 people then talk to them probably after the show, and then do that hour drive home. I mean, that’s what I do. That has more meaning to me than any of the other bullshit out there.”

“It’s such an incredible experience, they’re so smart. Everyone is so smart.” Lee said. “This is what I cherish the most. being able to do something meaningful, to continue to try to make an impact, and to have Asian voices be heard, goddamnit!”

The relationship between Gina and Dennis (and Oh and Lee) extends to the cast and playwright Julia Cho as well. Both Oh and Lee had nothing but good things to say about their “incredible” cast-members.

“Office Hour” is playing at the South Coast Repertory until this Sunday, May 1st. Be sure to see Cho’s amazing new work, and be sure to stay for the incredible performances by the entire cast. Tickets can be bought here

With the 40th season of Saturday Night Live approaching, SNL recently tweeted out a call for host suggestions.  We took the initiative to write up a list of Asian American talents who would rock the stage as a SNL host.