With the chronic lack of diversity in mainstream entertainment, it’s easy to look to the few prominent figures in the industry and throw our support behind known names like Ken Jeong, George Takei, Lucy Liu, and the Far East Movement. The downside is as a result, sometimes up-and-coming local artists get forgotten. That’s why it’s important that events like the block party thrown fundraiser by the East Meets West Bookstore exists to help empower artists.

East Meets West Bookstore was founded in 1999 by Professors Wen Kong and his wife Jin Au Kong to be a safe space for the Chinese immigrant community in Cambridge. In 2004, the bookstore was taken over and expanded by their son David Sun Kong. With help from community organizers, Kong revived the bookstore to be a space for the local AAPI community. According to their website, “East Meets West served as a hub of art and activism and the home of Boston Progress Arts Collective, which organized what is now the longest running APIA open mic on the east coast, East Meets Words.”

A week and a half ago on September 26, 2015, East Meets West hosted a block party fundraiser, bringing in artists from all around the country to talk and perform throughout the day. The invited artists included local Boston area groups like the all-women Japanese taiko drumming group the Genki Spark, international beatboxing champion Gene Shinozaki, and Kollaboration Boston finalist band Juice from Boston College. Bigger names from outside the area were also in attendance like Tony Award winning spoken word artist Beau Sia, hip-hip group Magnetic North and Taiyo Na, and alternative rapper DANakaDAN. A small brewery, Aeronaut, hosted the day events and the evening concert took place a few doors down at Brooklyn Boulders, a rock climbing gym. 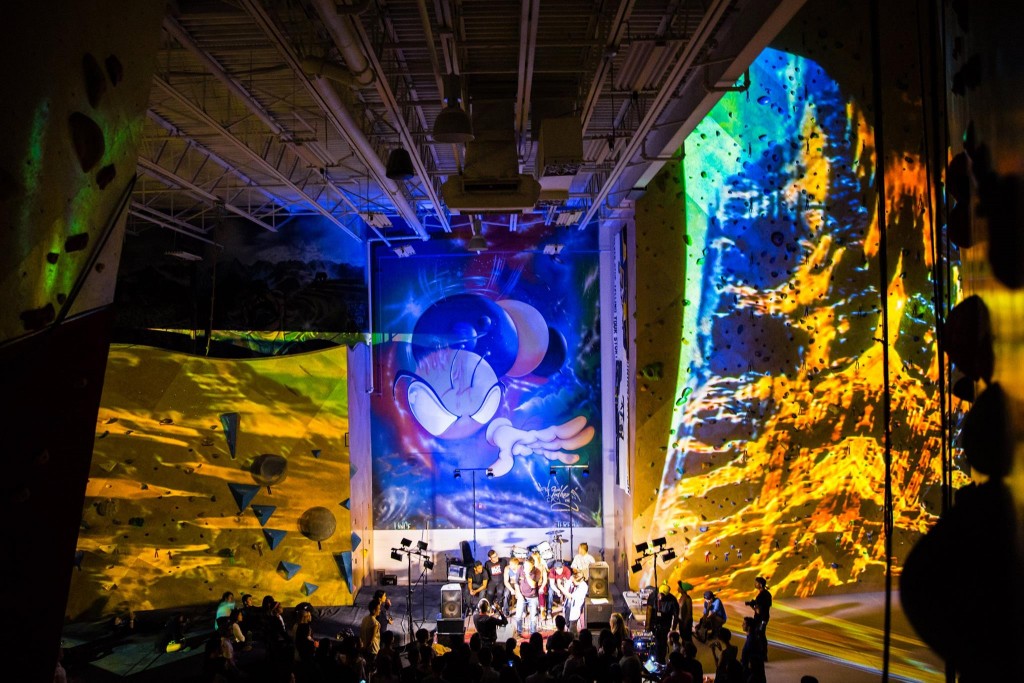 Brooklyn Boulders was probably the most original concert venue I’ve ever been in. With a small stage, towering rock walls on every side, and bright and triply projections on the towering rock walls— it made for a great venue where the audience could get close to the stage and connect with the artists during their performances.

There was an accepting and welcoming atmosphere at the block party that carried on throughout the day. The afternoon East Meets Words open mic featured entirely local performers who were just as supported by the audience as the bigger names. All of the guest performers and speakers were also close friends and supporters of the bookstore. Beau Sia, Magnetic North and Taiyo Na, and DANakaDAN all remembered performing at the bookstore during its early days and were happy to be there to help East Meets West with its fundraiser. 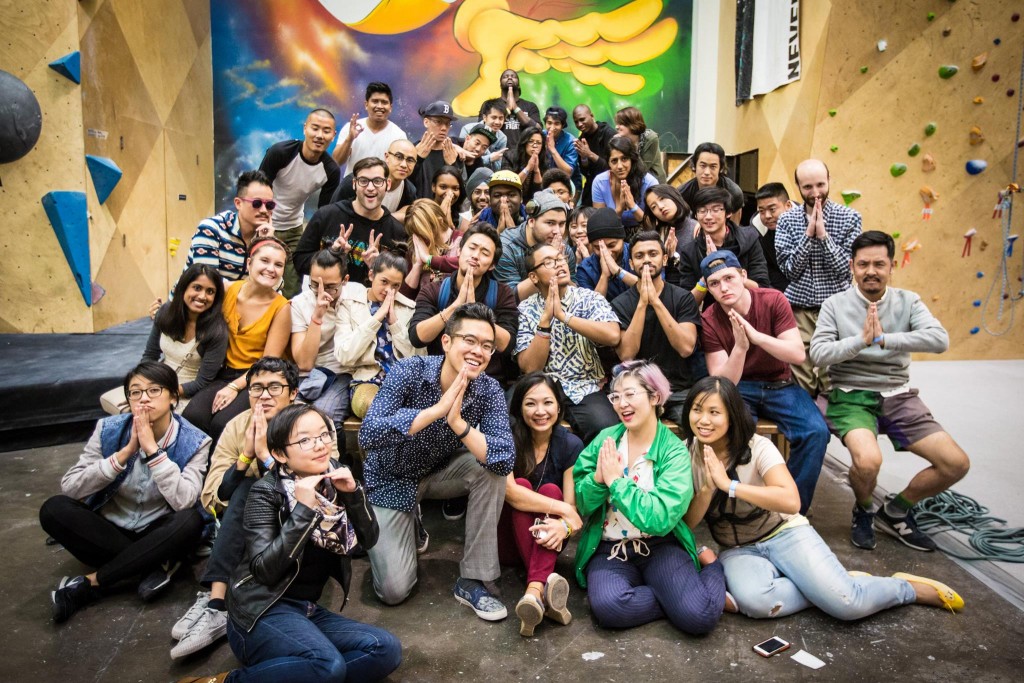 While happy to support a good cause, I was also glad to be able to discover new artists to follow after seeing them perform such amazing sets at the East Meets West block party. , including New York’s The Beatbox House, drummer Madame Gandhi, and Gene Shinozaki. Concerts and fundraisers like the block party help give local artists a chance to get their names out there, and a platform like East Meets West Bookstore is vital to keeping the small art scene in Boston alive and empowered. Because then one day when all these small artists make it, you’ll have a few stories to tell about how you knew them when.

All photos credited to David Sun Kong at EMW Bookstore

Help keep the Kollaboration movement alive & kicking in 2015! Every little bit helps & we are grateful for your support!

On April 17th, 2015, Kollaboration Boston saw a whole new wave of talented artists pour their hearts out on stage. The atmosphere in Royale Nightclub was historic: guests were cheering for each performance and clapping for every high note, every move. During Derek Hsu’s performance, we even had a few guests jump up from their seats out of amazement. Our 4th showcase was a success. Our finalists were EastSide, Esther Chung, Harrison Kim, Juice, JDep, and Elise Go. The amount of talent we saw that night was unbelievable and we’re glad our guests were able to witness the magic on stage. Our guest performers, Unofficial Project, Derek Hsu, and danAKAdan were also important assets to the night.

All our performers made the night memorable. Some artists played original songs and others played original medleys, all the while inspiring the audience to move with their music. The Kollaboration Boston team worked hard for a year and a half to put the show together and it definitely shows. Adlai Grayson was the host this year, and as he did last year, he did an incredible job. After Harrison Kim’s “Chocolate Green” song, Adlai jumped right in and added, “Can I be your chocolate…green?” This is just a small example of how he was so witty and interactive with not just the guests, but the performers as well.

Overall, the show went smoothly and the guests were able to go back during actual club hours (10:30pm-2am) to party with Cedric Gervais as the DJ of the night. We would like to thank Amazon and Mint Nightlife as our official sponsors this year. It was a great kick off to the new Kollaboration season, and we’re excited for what’s in store next year for Kollaboration Boston!

Kollaboration Boston is excited to begin Kollaboration’s 2015 season with our fourth annual showcase!

Kollaboration Boston IV will be held Friday, April 17 at Royale Nightclub in downtown Boston, which features young AAPI artists from around the Greater Boston Area.

These six artists are competing for a chance to perform at Kollaboration Star 2015 in Los Angeles later this year and win $10,000!

GENERAL ADMISSION: $15
GA + AFTER PARTY (21+, featuring Cedric Gervais): $25
For groups of 10+, please contact us at: bostonkollab@gmail.com

Tickets can be bought at:
https://www.ticketfly.com/purchase/event/823079?utm_medium=bks