Kollaboration’s first ever SXSW showcase was featured  on today’s edition of NPR’s All Things Considered!

Missed the broadcast? Not to worry ~

Check out the audio archive and web article of the segment here!

Stay tuned to Kollaboration.org for more recap coverage of our experiences at SXSW, including highlights from our panel and our showcase! In the meantime, here are some pictures for our showcase.

After a month-long online campaign, Kollaboration finalists Trace Repeat recently finished crowdsourcing their debut EP with over $8,000. Along with meeting their initial $5,000 goal, the band will now perform at South By Southwest and produce a behind-the-scenes video of the recording process. 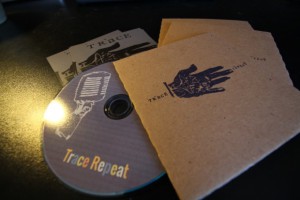 The six-piece Oakland, California band began two years ago by Zach Hing and Wesley Woo, and was originally a side project for all the members. What began as a cover band of Motown and classics like Stevie Wonder, Michael Jackson, and James Brown, Woo said that Trace Repeat began to draw on those influences to write original songs, creating their own style of funk band. In May 2016, the band met Kollaboration San Francisco staff member Lauren Lee and last November, they represented SF as the city finalists at the Kollaboration STAR showcase. Representation in the arts is important to the band, and their multiethnic Asian American identities played a large part in the band’s Indiegogo story.

Giving is not without its perks. To fit the band’s throwback aesthetic of older days filled with postcards, polaroids, and typewriters, Trace Repeat’s perks for donors featured a number of those very antiques. For $10 backers got a typewriter-written thank you note, $75 gets an engraved pocket watch, and $200 gets a vintage case made from repurposed suitcases and “comes fully loaded with CDs, stickers, flyers, and other Trace Repeat memorabilia.” And for $1,000 and the chance to “own a piece of the album,” Zach and Wesley are giving away their guitars and bass used to record the album (though no one has claimed it yet.) The band wants their debut EP to recall the days of finding an old-school vinyl gem, and they put a lot of thought into perks to reflect the band. The idea for the actual items came to the them on a road trip.

“We were in a very small car, with no air conditioning, driving through the hottest part of central California,” Wesley adds. “And I personally love collecting vintage things, just weird things no one wants anymore. We wanted to make interesting rewards, so why don’t we find really old stuff and turn it into new stuff.”

With less than 24 hours to go of the campaign and a fully funded studio album on the way, Trace Repeat is most excited for fans to hear the album. Their recording studio, Watershed Sound, has helped the band not feel stressed out about producing the album while they work on mixing the songs. The six songs on the EP are all Trace Repeat originals, familiar to fans who have seen the band perform before, but the EP won’t sound old hat. 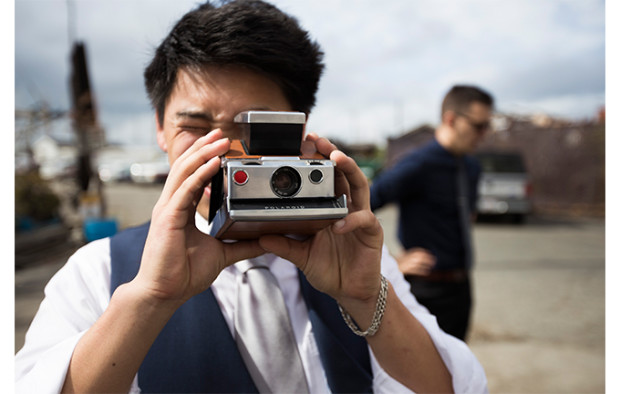 Along with the EP, Trace Repeat is taking their new songs on the road to Austin as one of the band’s stretch goals. David acted as one of the biggest cheerleaders for the band to accept an invitation to play at the Red Gorilla Stage at the Austin, Texas festival after they reached the first stretch goal of $6,000. During their four day stay in Texas they also plan to play for the first time in an Irish pub on St. Patricks Day.

With Trace Repeat’s first EP is on the way, the band looks to set themselves apart as a funk band. Zach and Wesley agree that the main focus of the Indiegogo campaign isn’t to compare or compete Trace Repeat to other Asian American groups, but to add the band to the mix of Asian American artists. Wesley says that when Trace Repeats performs, he doesn’t think of the band as making a certain statement about Asian American empowerment when they get on stage. He only sees Trace Repeat as “a really awesome funk band.”

“All we’re saying, and this goes plain and simple in our Indiegogo campaign, is that there’s just not enough of us.” Zach said. “Bands like Run River North and Far East Movement are great; I really, really stand for what they do. It’s that key word— there’s not enough of it. We want it to become something that isn’t the anomaly anymore, we want adequate representation.”

Trace Repeat’s Indiegogo campaign ended February 11 with $8,165 from 194 backers. The album can be expected later in 2017, and Trace Repeat can be seen on their YouTube channel, Facebook, and Instagram.

If you’ve been following Kollaboration in 2016, you’d know that we’re headed to this year’s South by Southwest Conference & Festival in Austin to host a social impact panel on Asian American representation in media! A massive 10-day multi-media event consisting of a music festival, film festival, and interactive conference, SXSW is where trends are launched and the next big thing is discovered, and we’re excited to be a part of it. Our panel, “Asian Americans Break the Silence & Stereotypes,” will take place during SXSW Interactive on Sunday, March 12 at 5pm and will feature a discussion between Kollaboration Executive Director Minji Chang and a panel made up of Phil Yu (Angry Asian Man), Jenny Yang (Disoriented Comedy), and Dante Basco (Hook, Avatar)!

And as if that wasn’t huge enough, we’re also excited to announce that Kollaboration will be producing the first ever official showcase of Asian American musical acts at this year’s SXSW Music Festival! Taking place on Thursday, March 16 at Lambert’s Downtown Barbeque, our 2017 lineup include Run River North, Megan Lee, Big Phony, and Melissa Polinar! Only about a fourth of acts who apply for the festival are granted a performance slot and Kollaboration is proud for the opportunity to showcase these amazing Asian American talents to the tens of thousands of festival attendees in Austin, “Live Music Capital of the Word!”

Whether you’ll be joining us in Austin or supporting us from home, help us spread the word that Asian Americans are bringing the noise to SXSW 2017! And for those of you interested in either covering our events, or sponsoring them, shoot us a message at info@kollaboration.org

Watch Kollaboration Star 2016 live thanks to our partner MyxTV

Special thanks to Zenith Division for production support

The team at Kollab SF cooked up a couple of great cover videos just in time for Valentines Day! Check out &Blue’s Patrick Wong as he covers Christina Aguilera’s Come On Over (All I Want is You), a classic tune that’ll take you right back to your middle school days (just me?)!

“This edition of the Kollaboration Green Room features Ruth + the Library, an up-and-coming band based in Los Angeles, combining funky, jazzy beats with the unique vocal styling of lead singer, Ruth Cho. They are currently in the running for the Grammy Amplifier competition so if you like what you hear, send them some hits at http://www.grammyamplifier.com/artists/submission/songs-balcony-my-love

Hear more from Ruth + the Library at http://www.librarycollective.co/ and visit their YouTube channel at https://www.youtube.com/channel/UCiOzb_3XKJhhAd9UVICuykQ

Matt Almodiel is a singer/songwriter and LA transplant by way of the DMV (DC/Maryland/Virginia). An alum of the 2011 Kollaboration DC showcase, he headed west to attend UCSD before moving to LA to pursue his musical dreams. A master of the mash-up, his infectious melodies will have you humming and dancing for hours after he’s finished playing.

Hear more from Matt at https://soundcloud.com/mattalmodiel and visit his YouTube channel at https://www.youtube.com/user/MattAlmodiel/

Setlist:
“Into You”
“Nothing Left to Lose”
“No Big Deal”

We’re excited to announce a new digital showcase series called “The Green Room,” launching next Monday here on Kollaboration.org (and our YouTube channel). The Green Room is a callback to our annual showcases when artists would jam with each other in the green room while waiting for their turn to go on stage.  Every few weeks, The Green Room will showcase an extended live set from an artist from our Kollaboration community. First up is Kollaboration Los Angeles 2015 performers Perry and Danielle. Don’t miss their set next Monday, November 30!

What is your self-described style and influences?

You would think I’d have a go-to answer for this question after being asked so many times… I would say acoustic singer-songwriter, though I understand this is a pretty vague description… I picked up the guitar when I was into a pretty heavy classic rock stage (particularly AC/DC and Van Halen) in my early teens, though I can’t say that my writing is even remotely influenced by Eddie Van Halen’s style. I do find myself listening to a lot of strong female singer-songwriters, like Regina Spektor, Alanis Morisette, and Alicia Keys among many others.

How did you start playing music and what are your musical dreams?

I used to “write poetry” in my early teens, which transferred into some of my earliest songs when I eventually picked up the guitar. The first time I performed in front of a crowd was at my sister’s wedding reception when I was 19- from then on, I was hooked! Right now I’m just having fun writing and playing around town.

What has participating in Kollaboration meant to you?

It has definitely pushed me to continue to do what I love- writing and performing! I auditioned for Kollaboration on a whim when I was at a point in my life where I had taken a step back from music and had thrown myself into other work. My experience with Kollaboration made me realize that I need to continue to nurture my creative side in order to feel like my best self. 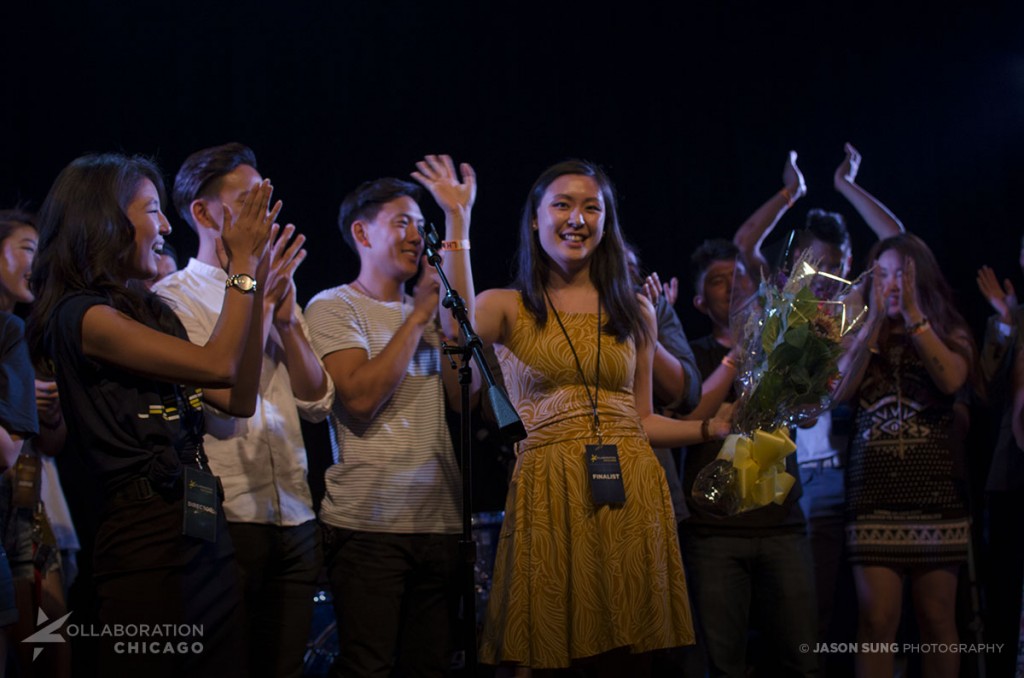 How are you preparing for STAR?

Other than playing over the song I plan on performing, nothing

What do you hope the audience will take away from your performance?

Do you have any pre-performance rituals that you do to get ready to sing?

For some reason, more often than not, I feel like I always come down with a sore throat right before a performance, so I binge on tea with honey and lemon and cough drops. Maybe it’s just nerves?

Where can people find more music of yours?

I have some videos and recordings posted on my facebook page at facebook.com/dhaea.music . You can also find recordings at dhaea.bandcamp.com

What inspires you to write new music?

I find that I am compelled to write when I’m going through some sort of crisis or change, be it positive or negative (okay, more so negative!), to help me process the situation.

Watch Dhaea perform for the chance to win $10,000 at Kollaboration Star, taking place 11/14/15! Tickets are on sale now at star.kollaboration.org