The Green Room sets up shop in the Bay Area for a special acoustic set from musical duo Astraogik (lead singer Charito Soriano was a finalist from the first Kollaboration SF showcase). A self described Ambient Future Soul group, their sound combines influences from neo-soul, reggae, r&b, island, hip-hop, electronic, world & indie. For this set, they put down their tech for a stripped down sound that’s just as mesmerizing.

The last video in Kollaboration SF‘s Valentine’s Day cover series has CryWolffs Violin’s rendition of Jason Derulo’s Marry Me. This beautiful instrumental cover will make even the most hardened cynic believe in love (I’m of course talking about me… I’m the cynic)!

If you like what you hear check out the other 2 videos in Kollab SF’s Valentine’s Day series.

The team at Kollab SF cooked up a couple of great cover videos just in time for Valentines Day! Check out &Blue’s Patrick Wong as he covers Christina Aguilera’s Come On Over (All I Want is You), a classic tune that’ll take you right back to your middle school days (just me?)!

Ashly Perez sat down with Kollaboration SF Staff Member, Layla Yu, to talk about the importance of representation for Asian-Americans in the media, working at BuzzFeed, and insecurities. Perez hosted Kollaboration San Francisco’s 6th annual Artist Showcase held at the Memorial Theater in San Francisco on October 10, 2015.

Watch all 3 parts of this exclusive interview series, and then check out Kollab SF’s excellent writeup.

Kollaboration SF celebrated a successful showcase last week! Here’s a look into their media day shenanigans. Congratulations to the team from us at the Kollaboration Blog!

On the evening of Saturday October 10th, in the midst of San Francisco’s Fleet Week, the Marines’ Memorial Theater was occupied by excitement of a different kind: the 6th Annual Kollaboration SF Showcase. Unlike past Kollaboration shows featuring fresh-faced finalists competing in front of a panel of judges, all of the acts this year were alumni of past shows, with each of the six alumni would collaborate with another in a non-competitive exhibition of talent. 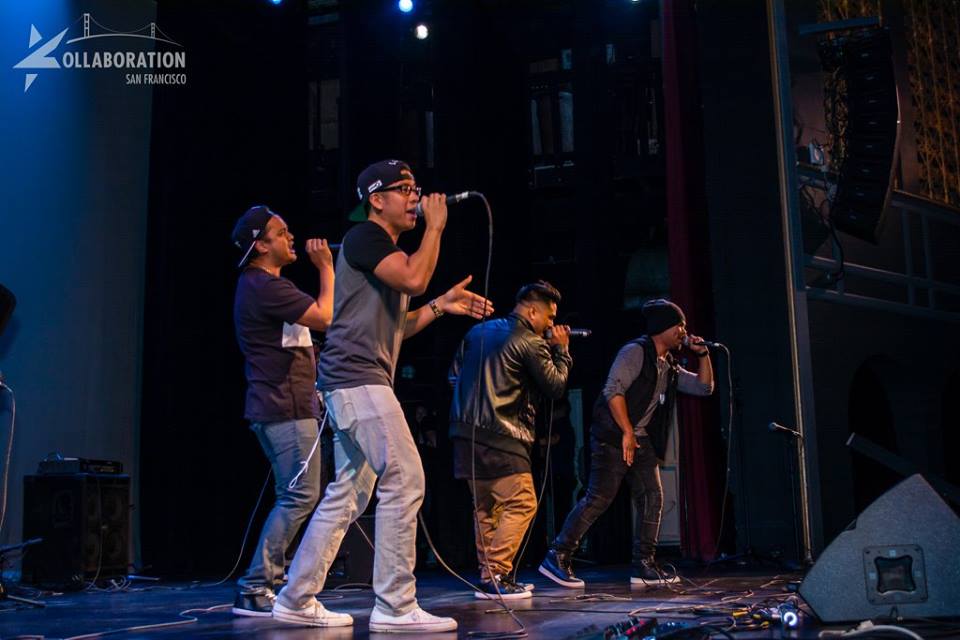 R&B group ANAK – winner of Kollaboration SF 2 – and R&B/Soul band The Delivery – a finalist of Kollaboration SF 3 and 4 – were the first mash-up to perform. From original songs to covers, the two groups were a good mesh as vocals (from both sides) and instrumentals collided in an almost Motown-esque kind of vibe. They kept the energy high onstage and the performers were really engaging with the audience. 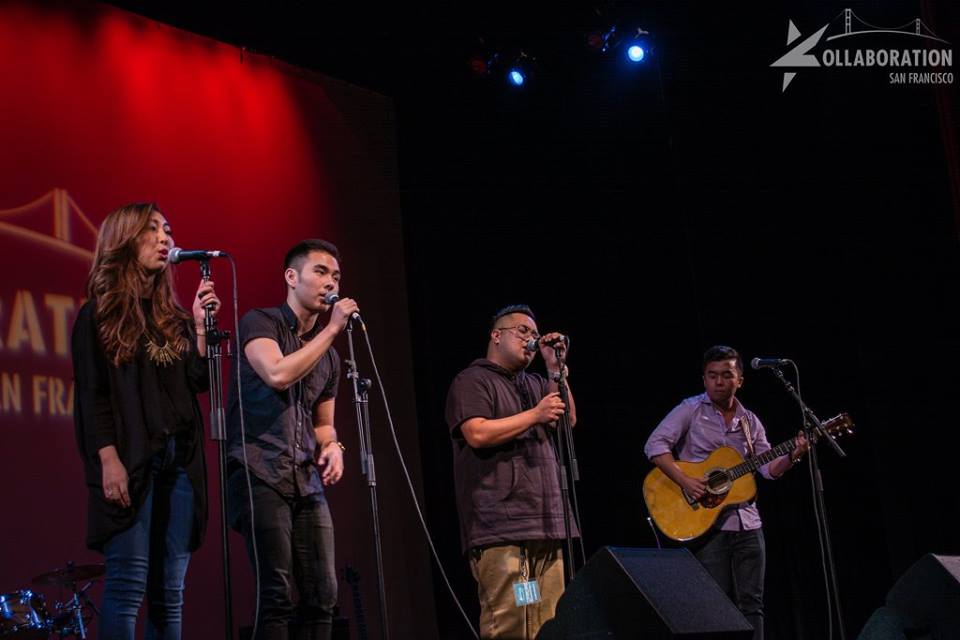 The energy went from high to mellow as the next collaboration took to the stage. Melvin Sings!– a finalist of Kollaboration SF 4 – and &Blue – winner of both Kollaboration SF 4 and 2013 Kollaboration Star – were accompanied only by a guitar as they sang their set in a chill, laidback vibe. Their voices blended harmoniously together with each song they sang, as the audience soaked in their serene yet fun performance. 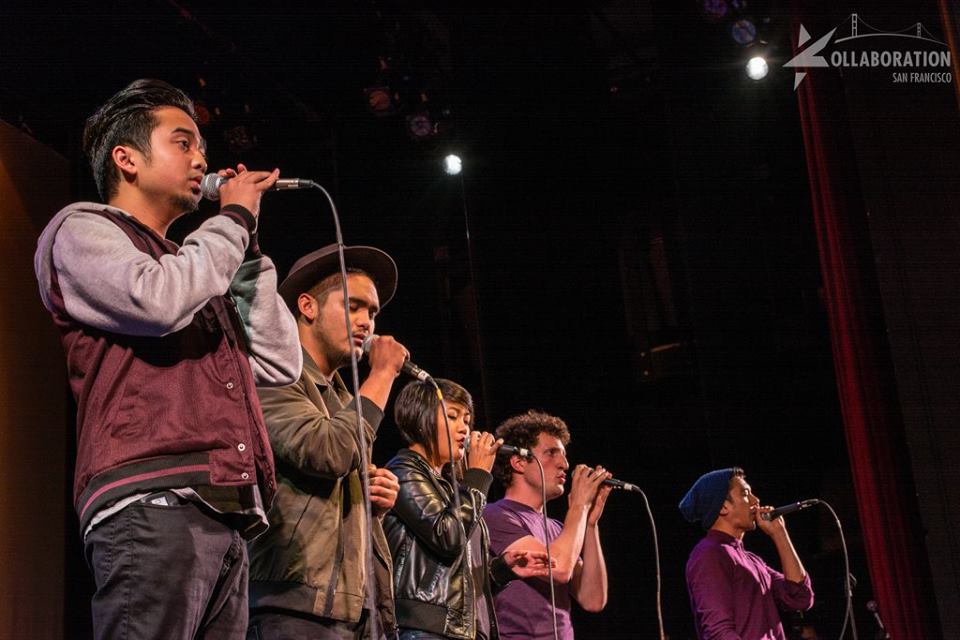 The final performance brought together the musical talents of violinist CryWolffs Violin – a finalist of Kollaboration SF 3 – and a cappella group SanFran6 (whose members include a number of finalists from Kollaboration SF 4 and 5). Kicking off with a showdown between CryWolffs and SanFran6 member DRC Beatbox – winner of Kollaboration SF 5 – the rest of the a cappella group, who were also previously seen on NBC’s The Sing-Off, came together for a musical explosion made up with covers of hit songs. Together with CryWolffs as the solo instrumentalist, the singers of this collaboration performed along with him with melodic voices and skilled beatboxing. 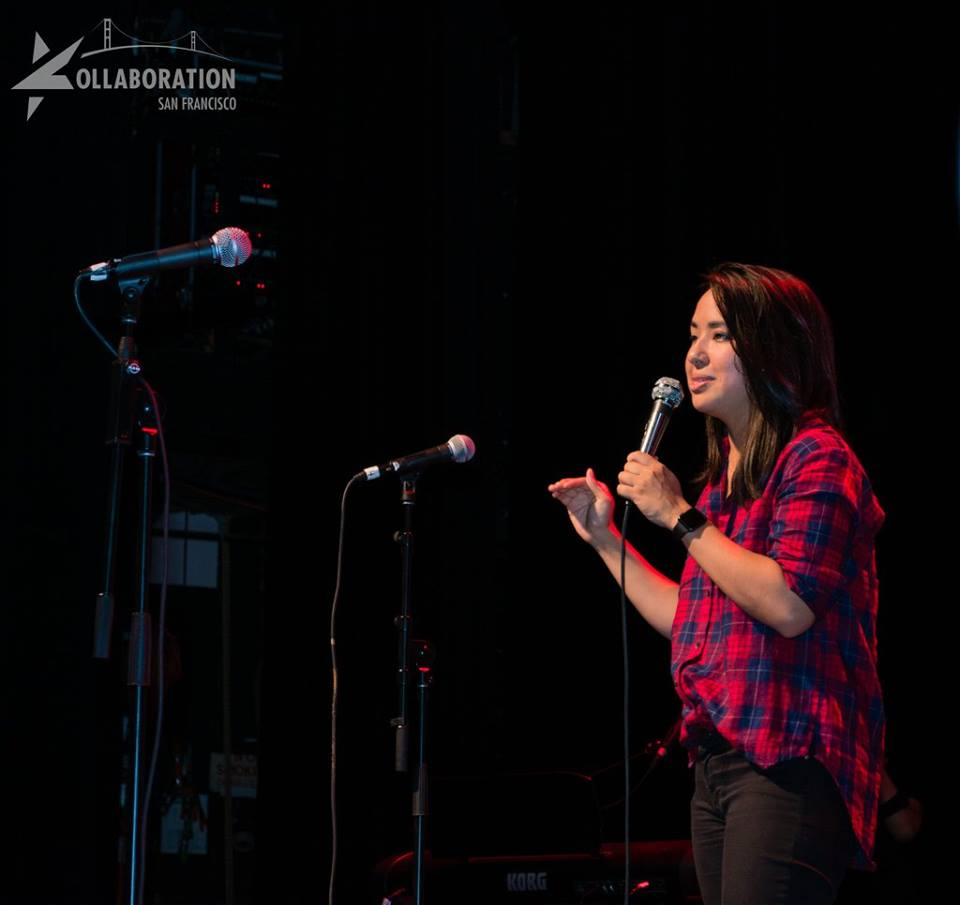 Host Ashly Perez of Buzzfeed Motion Pictures kept the audience entertained throughout the show and in between acts. From making her first appearance by dancing out onstage to Taylor Swift’s “Shake It Off,” to recounts of youthful shenanigans and even a rendition of “Smelly Cat,” she was an enjoyable and hilarious host. She even served as the judge for the audience singing competition that immediately followed the intermission and she, along with everyone else in the audience, was blown away by the astounding vocals of the eventual winner, Kollaboration SF staff member Layla Yu.

It was a fun night of tunes, jokes, and cheers; all without the stress of wondering who would be the winner at the end of the night. If anything, the night’s events served as a reflection of the words spoken by Executive Director Daisuke Kojitani in his introductory speech, explaining how powerful entertainment is in its ability to send messages and influence thoughts and lives, and why it’s so crucial now than ever before to provide a platform for a more accurate representation of the Asian American community.

In other words, it’s all about “Empowerment through Entertainment.”