When I called Peter Chung for this interview, the first thing he commented on was the area code of my phone number.

“Yes,” I said, knowing from previous research that he went to UCSB.

I said that Santa Barbara was home for me and that I attended college at to USD. He then proceeded to ask me about my whole life, including where I lived now, what I was doing, and how I joined Kollaboration.

“You thought you were calling to interview me, huh?” he said jokingly.

I laughed. If this conversation taught me anything about Peter Chung, it’s that he seems to appreciate irony.

I point this out because there is something very ironic about Peter’s life story: he hated music as a kid. 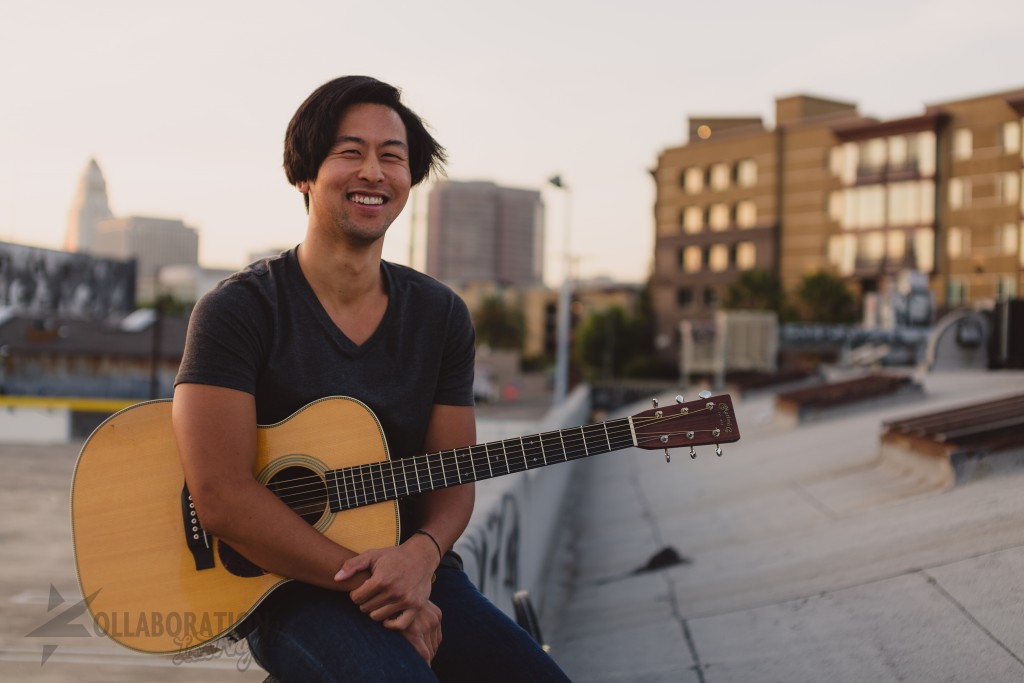 Both of Peter’s parents were in the Church choir in his hometown of San Jose. He describes being forced to take piano and trumpet lessons, but enjoyed being part of the church choir with his parents. While he learned how to play the drums and guitar during this time, he didn’t do it for the music.

“I was surrounded by people who were cool,” said Peter. “When you have a crappy job, but you’re surrounded by cool people, it’s more fun.”

The “crappy job” of playing music started to turn into something else entirely when he started to learn covers of John Mayer songs on the guitar. He had learned guitar without any official lessons and mostly thrived on tips from friends before YouTube guitar lessons were a thing.

“I got into [John Mayer’s] music by asking what songs I should learn on the guitar,” said Peter. “They would say it’s really easy to and ‘oh, these chords on this song are easy.’”

Peter describes learning the popular song “No Such Thing” as a good learning experience because it taught him to incorporate lead guitar and rhythm guitar. When Peter started learning covers, he started to enjoy the music for one thing: the attention.

“I’m an attention whore,” said Peter. I can assume he’s joking, but he said it so seriously, it’s hard to tell.

Whether or not all eyes are on him now, Peter is in the music business for the long haul. Before he went professional, he had uncertainties about dedicating his whole life to being a musician.

“I was scared to put myself out there,” he said. “But I had friends who told me that I had to put [my music] out.”

By the time he was discovered by Kollaboration reps, he had already started pursuing music full-time.

“All I did was go to open mics,” said Peter. “I saw the open mic Kollaboration SF and decided to do it. They liked me, so they told me about [the showcase].”

He went on to participate in Kollaboration SF 3 and the opportunity opened up doors for him.

“I think Kollaboration is fantastic for opportunities for exposure. They’re really helping musicians and artists and they connected me with so many gigs I never expected.”

Now that Peter is pursuing the coveted national title of Kollaboration Star, he didn’t seem nervous at all. When I talked with him, he was doing some maintenance on his guitar for a string of gigs he was performing in San Francisco.

“I literally have done nothing to prepare,” he said.

That was a few weeks ago. Even if he did anything to prepare, I wouldn’t be too worried about the Kollaboration vet. Peter dreams of performing his original music around the world. Specifically, he hopes that his lyrics stick with audiences.

“For any show, I hope that there’s a connection. A fear I have is people won’t understand what I’m saying.”

“What can really touch you or have an impact is the message behind it,” Peter said. “And that’s why the lyrics can have a greater impact.”

Watch Peter perform for the chance to win $10,000 at Kollaboration Star, taking place 11/14/15! Tickets are on sale now at star.kollaboration.org