Listen to the audio version of this article:

Stationed on opposite ends of the continental USA, my interview with Naomi Ko starts off with a weird game of video tag before the dawning realization that my sunny afternoon is an ungodly hour in her California morning.

After finally connecting, she says “Sorry for the mess. It’s been a long week.”

Known for her role in Dear White People, among other things, Naomi is a headstrong, ambitious woman with experience as a writer, actor, and director. She takes advantage of the millennial “we can have it all” mentality and seems intent on doing just that.

But it isn’t easy. “I am kind of untraditional when it comes to being an Asian American woman.  I am aggressive, I swear a lot…I don’t really give a f*** anymore.”

To Ko, being an Asian American in the industry has come with its fair share of challenges. “Accessibility is one of the biggest hardships that I’ve encountered as an Asian American. I have definitely encountered issues about being Asian American but also about being a woman, especially when it came to pitching and talking to Hollywood studios and networks and producers and executives who have certain expectations of what they feel I should be and what my work should represent.” She quickly points out the time when she pitched a violent historical drama and how surprised people were that an AAPI woman wanted to tell such a violent story. “One person even said, ‘Wow, this is really violent,’ and I said, ‘Well, haven’t you seen Game of Thrones? That’s really violent.’ But I guess if three white, British dudes want to do it that’s cool.”

Indeed, in the western film industry, Asian Americans are underrepresented on and off the camera. Actors that do make it in a feature film or major TV production tend to be stuck playing the model minority. “I think for actors, when you go into auditions and they ask you to do an accent—that’s a more aggressive form of racism. But when you’re in a room meeting with different studio execs and producers, you’ve already proved yourself in the sense that ‘Okay, my writing is good enough to get me through this door.’ Then, there is how are they going to nitpick, and how are they going to say no to you, and how is that influenced by what they perceive of you?” She continues, barely stopping to take a breath. “But then also, that’s the most ideal situation. So, how do you even get your script through the f***ing door?”

For Ko, untraditional is both the problem and the solution. “I think those are the hardships for AAPI just generally in terms of how Asian Americans are dealt with in society, and how that really reflects in Hollywood. There is such a passive-ness when it comes to how people treat us and what people expect of us.”

I ask her to elaborate. She recounts her childhood in a primarily white suburb of Minnesota, promptly adding, “Minnesotans are kings and queens of passive aggressiveness.” She chuckles at her jab before saying, “I feel like I understand a little bit of these hardships when you come to Hollywood because I have over twenty years of experience dealing with white people who constantly underestimate me.”

She then recalls her early performing days. “I was a big performer throughout middle school and high school, and I never got parts. And for a while, I thought it was because I was not talented but then I realized—I’m pretty good at what I do.”

Pretty good is an understatement, if you ask me.

She continues. “I was really sick of having no control over the casting process… once you can specify what your characters are and what their experiences are, there’s a lot more power in that.”  I ask how she got herself into writing. “I’ve been writing since I was a little kid, and I wrote terrible fan fiction.” She laughs. “You know? I was one of those.”

Despite her growing success, she is still painfully aware of her social background and responsibilities, and uses this to shape the stories she wants to tell. “In most of my scripts, I have a strong Asian American woman and I’m not gonna change that. Not anymore.”  Hollywood, Ko says, which has been long criticized for perpetuating a white-male dominated entertainment industry, “does a great job at keeping us invisible, and silencing us in that way of artistic expression.  Because they realize that a lot of power comes through that. And if you can just settle with doing our colonoscopies, then maybe you don’t want to be visible, and maybe you don’t need to be expressive.” She laughs darkly.  I laugh as well, thinking about all the colonoscopies my pre-med friends will soon perform routinely.

Another problem she has, is the lack of diversity in AAPI roles. “The problem,” according to Ko, is “representation.” Not only a tendency for Asians to get cast in “model minority” characters, but also the demand for those characters within the AAPI Community. “I think also there’s a standard in what Asian Americans want and what they want to see. And I think they didn’t want to see this curly haired, potty mouthed girl swearing all the time.” By writing the stories, Ko finds that Asian Americans can contribute to the increasing diversity in mainstream media, but also notes that there is a “lack of diversity in Asian American voices because “you know how it is in theatre its very dominated by Asian American men.” 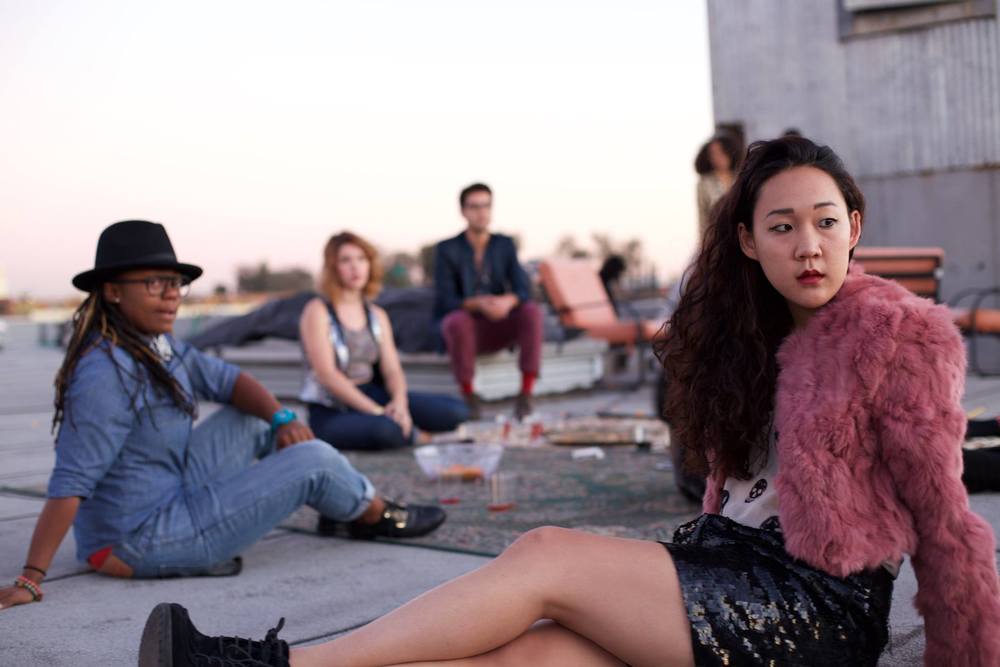 But for her, that’s not good enough. “It’s just funny that you can have Amy Schumer and Rebel Wilson who really just don’t give a f*** anymore and then you’re getting resistance from everyone about having Asian American women do really raunchy things.”

Naomi’s issues with representation, however, extend far beyond the AAPI community.  Blacks, Native Americans, and Hispanics are included too, and not just within the entertainment industry. Ko’s work and the stories she chooses to produce, stem from both a strong sense of social justice and a deep-seeded desire to tell the stories she knows best. “I feel like I really have something strong to say and, if anything, that’s it.”

I ask about her future. “One of my future goals is to start working on projects with other people of color who are representatives of their communities and to start talking about interesting stories that connect us—connect us in different relationships.” She reveals one such story, prefacing with, “I don’t think I can write this, since I’m not an LA native, but someone really should [make] a really complex, in-depth, complicated, messy, heart-breaking story about the LA riots and what happened with a shop owner, and her ties with the black community.” She paused. “I don’t know, I just want to write and see very good stories. And I think diversity has to do with that.”

Will this be the next Hollywood blockbuster? Maybe in the near future. “I think different stories produce better content,” She says, “and that’s what I want to do.”

Naomi is currently working on a series of projects, including one that “I really want to f***ing talk about, but can’t.”  But for now, you can join her fan club by following her on twitter (https://twitter.com/konaomie), checking out her IMBD page (http://www.imdb.com/name/nm6264075/), or her personal website (http://www.konaomi.com/)

END_OF_DOCUMENT_TOKEN_TO_BE_REPLACED

Named a must-read by the New York Times, the Wall Street Journal and the Guardian, Kevin Kwan’s 2013 debut novel about a group of Singaporean elite, Crazy Rich Asians, is set to be adapted onto the big screen.