Anna Akana is everywhere.  Well, not literally.  However, Anna figuratively has an egg in a lot of baskets.

While she’s mostly known for her hilarious and thought-provoking YouTube channel, Anna has also appeared in feature films like Ant-Man, and Hello, My Name is Doris, and has had roles on television shows like MTV’s Awkward, and ABC Family’s The Fosters.  Along with this, Anna stars in live improv shows and designs t-shirts for her fashion line, Ghost and Stars.

Even with all this on her plate, Anna was gracious enough to take the time for us and answer some questions about what she’s working on now and more:

What were you doing right before this?
Interviewing people for an assistant position.

I’ve never interviewed someone to work for me!  Is it as nerve-wracking as being the interview-ee?
It’s not nerve-wracking at all.  It’s more monotonous.  You hope that every single person who comes in will be the right person.

What was the last YouTube Video you saw?
I watched The Fine Bros most recent Last Moments that I was in.  I played a girlfriend who wanted to make up a grandiose story about how we met.  It was great!

Is it more fun to act, direct, or write on a project?
I love acting.  That’s my favorite part of filmmaking.

What is most important to you when you are working on a project?
That I give it my all.

Do quality, quantity, the number of views, etc. play a role in this?
As long as I learned something that I can apply to my next project, I am happy.

What is one of the biggest lessons you learned from this line of work?
I learned that you have to be ok with being a boss.  And when hiring friends, beware.  Relationship dynamics may be messed with.

What do you do when you have a creative block/when you’re stuck?
Reading helps.  I enjoy Steven King.

Your vlogs are very genuine, funny, and personal.  Is it scary to share so much of yourself with your audience?
I used to be a pathological liar, so honesty is always the best policy for me.  It can be scary, yes, but ultimately I’m happy that I was at least honest.

What’s next up for Anna?  While we are keeping our fingers crossed for another Marvel movie (she is too!), check out her most recent short film, “Loose Ends,” on YouTube.

I’m new to this sprawling city. In fact it has only been about two months since I officially moved here. Naturally, being the new girl, I’m always on the lookout for things to do and learn. Enter Kollaboration’s inaugural Leadership Conference.

Quite honestly, I did not know what Kollaboration was until I came to Los Angeles. I had heard about it in passing a few times, since it does exist across the country (14 cities to be exact), and I understood it to be an Asian American talent competition. It is an annual talent showcase but over the years Kollaboration has morphed from a platform for Korean American artists to share their talents to a pan-Asian Pacific Islander movement that unites and inspires aspiring artists to pursue creative careers. Kollaboration is all about challenging the status quo, creating change (not just talking about it) and dreaming big- and as cliché as that may sound, that’s exactly what my move here to LA and my life in general is about. 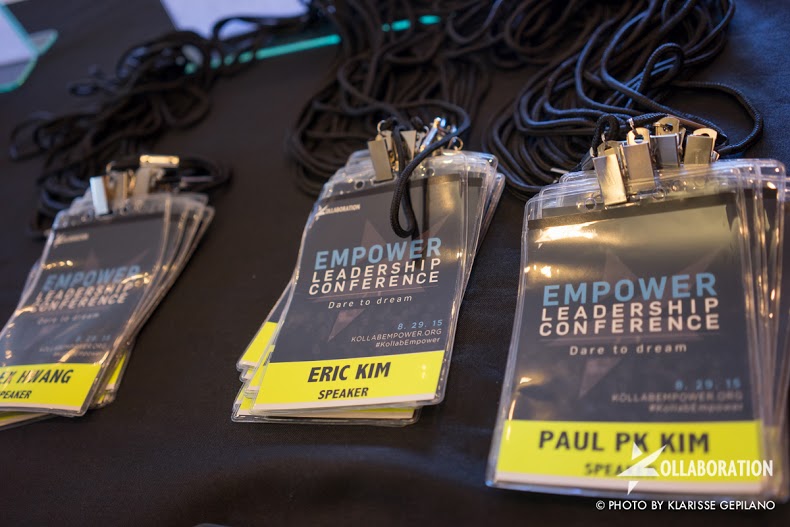 Needless to say, Kollaboration brought together a great group of speakers and perspectives from all corners of the entertainment and media industry. It was also nice to have like-minded individuals- people who challenge expectations, are curious about possibility and aren’t afraid to talk about fear, in the same room. It was a pretty empowering way to start my weekend, to say the least.

To do a summary of each session would be overkill, so instead, here are some quotables and highlights from the conference. 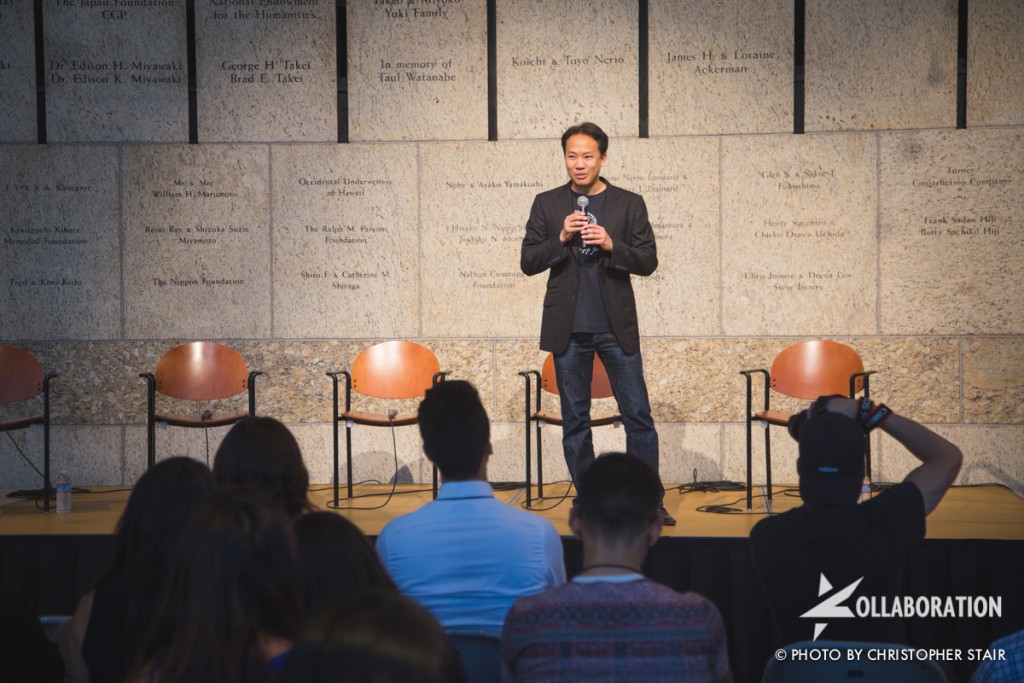 Jim Kwik, memory expert and founder of Kwik Learning, started the conference with some handy tricks on memory, particularly remembering names. He left us with a few mnemonics but the key message was that “Reasons reap results.” Basically,  all behaviors are belief driven whether it’s with memory or with following through with your thoughts. If you can believe that you will, you can. Also, “Practice means progress.” 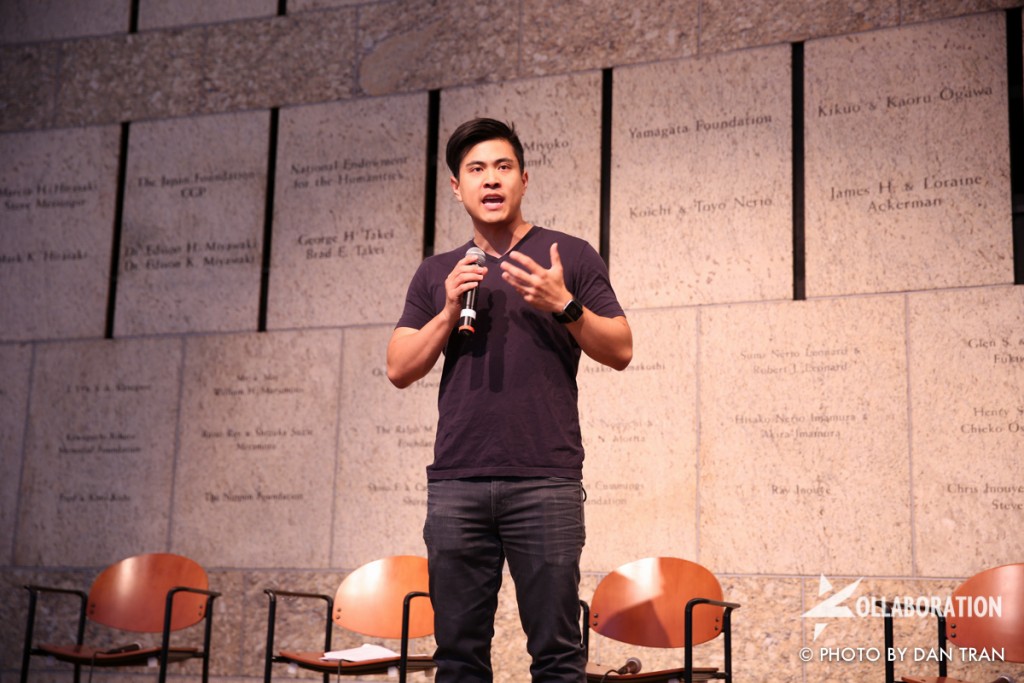 Bing Chen, founder and Chief Creative Officer of Victorious, a new media company, philosophized about the effects of technology before moderating a panel. Something he said really struck me: “It’s incredibly hard being yourself in 2015.” 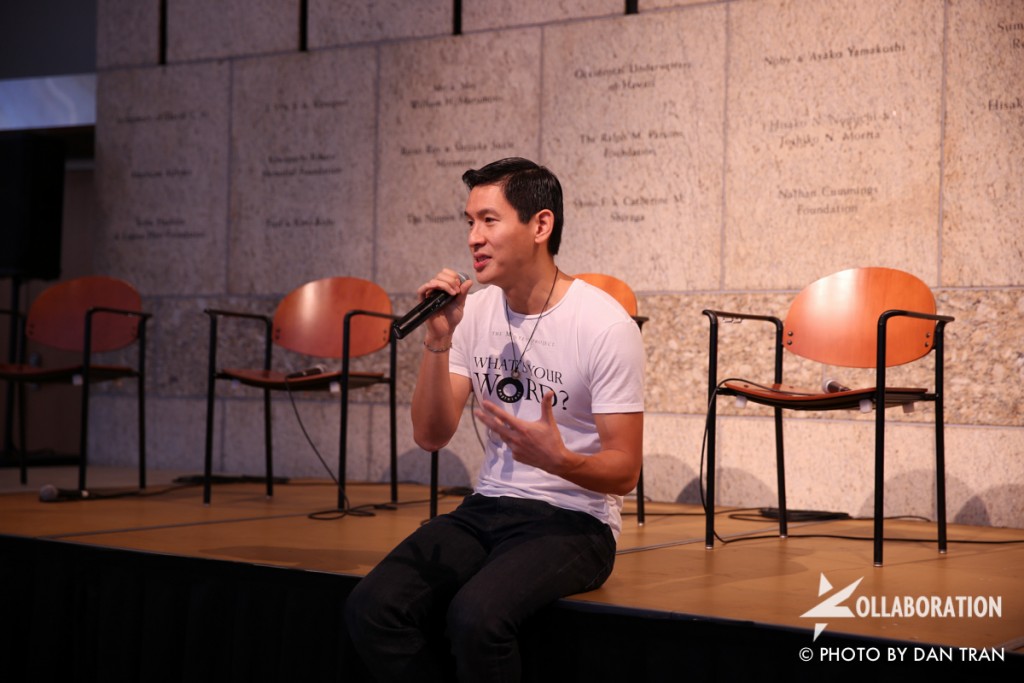 Chris Pan, founder of MyIntent.org, asked us a very profound question: What is your (life) intention? We all had to think of a word we wanted to focus our energy on or have more of in our life during a moment of silence. We then got this word stamped on a bracelet (or necklace) as a reminder. My word was Trust. 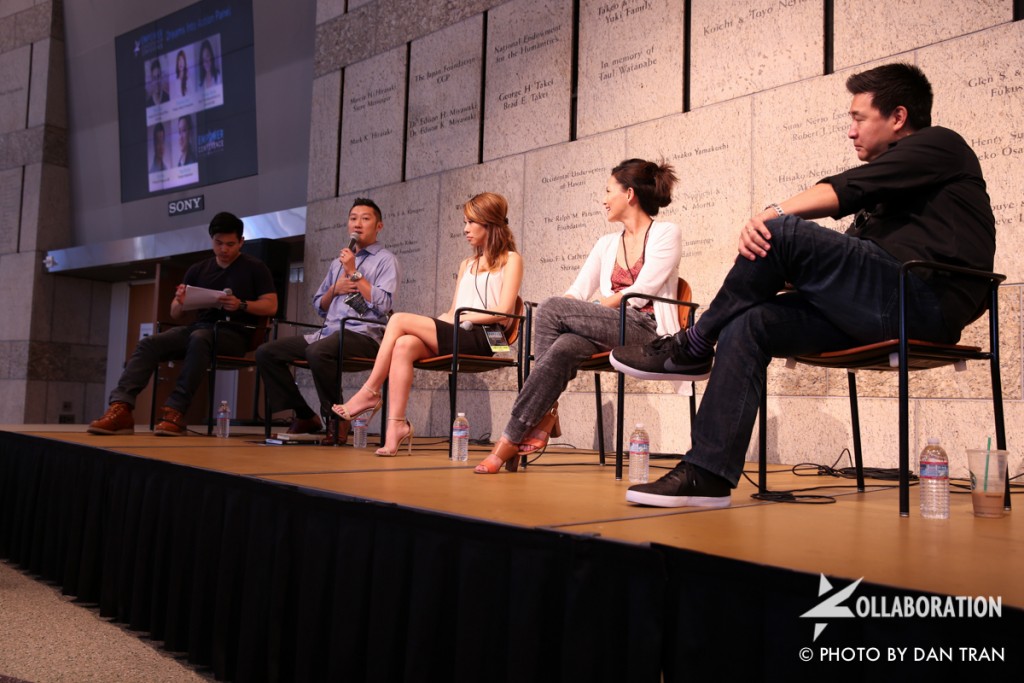 Tamlyn Tomita, actress known for her roles in Joy Luck Club, The Karate Kid Part II, and Teen wolf enlightened us with seasoned advice: “Acknowledge your fear and be fearless. Leave people thinking oh my gosh. What was her name? All I can leave people with is the energy you give them.”

Christine Chen, Producer at Wong Fu Productions, when asked what she wish she knew when she was 21 said:  “You get what you put in. This life is ready to bless you but no one is going to hand it to you. Check your ego at the door.”

Paul PK Kim, founder of Kollaboration (which is now in it’s 16th year) among many other accomplishments, spoke on the importance of focus. “If you chase two rabbits you won’t catch either.”

Eric Kim, Vice President of Current Programs at CBS Television Studios, where he oversees all phases of production for the network’s television programming said that in this day and age “you have no excuse not to do what you want to. The technology is readily available. If you’re a director, go direct something.” 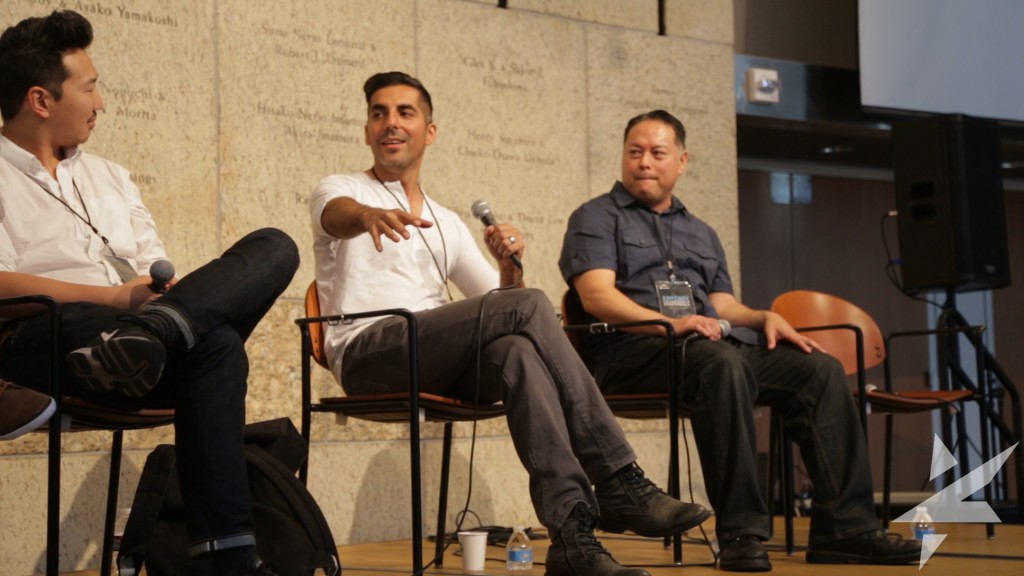 Sunil Malhotra, writer, producer and actor spoke on the importance of “Be[ing] a human being.” No matter what it is your doing or who you’re talking to, it’s key to maintain perspective and treat each other like, a person. 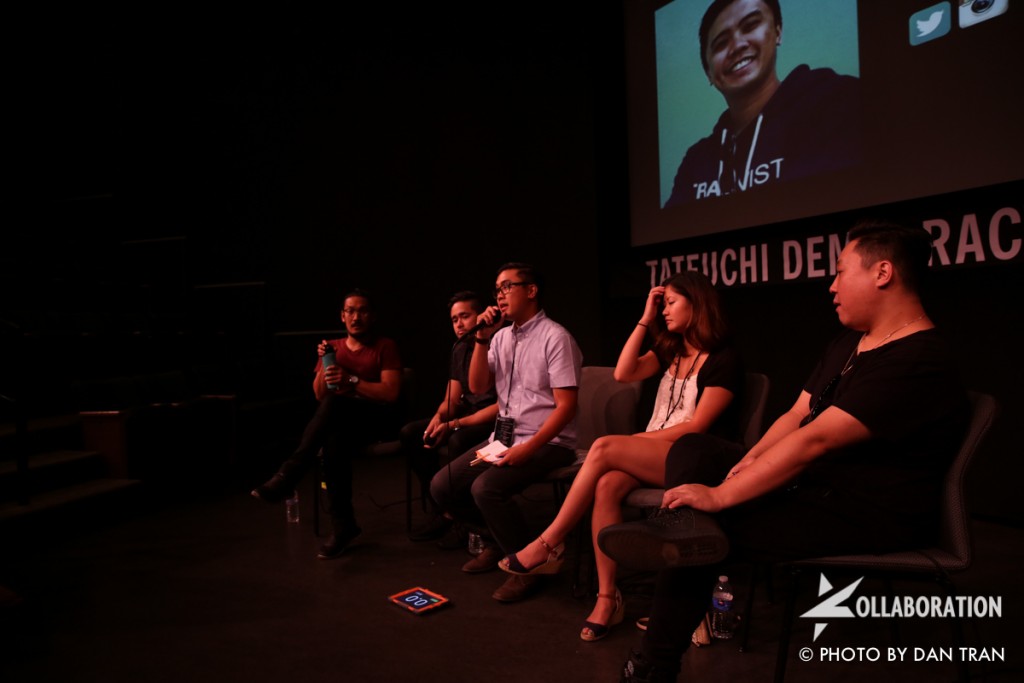 Alex Hwang, Lead singer of indie folk-rock band, Run River North, spoke about the difficulties of being a musician. But the things he knows for sure: “Believe in the product. Relationships mean a lot.”

Travis Graham, lead singer of New Heights mentioned Trust as an important factor of creating. “I think the main concern with working with someone in LA, is if you vibe. There has to be trust for the best work.”

Peter Hong, label executive, musician and producer never saw the kind of music he wanted to hear, so he did it himself. “I’ve always been the guy to create my own work.”

There was so much more (I had difficulty choosing between sessions) but you get the idea. It was a conference that reconfirmed and reminded me of the things that I already knew- the things that maybe we’re afraid to talk about out loud, but should talk about more. 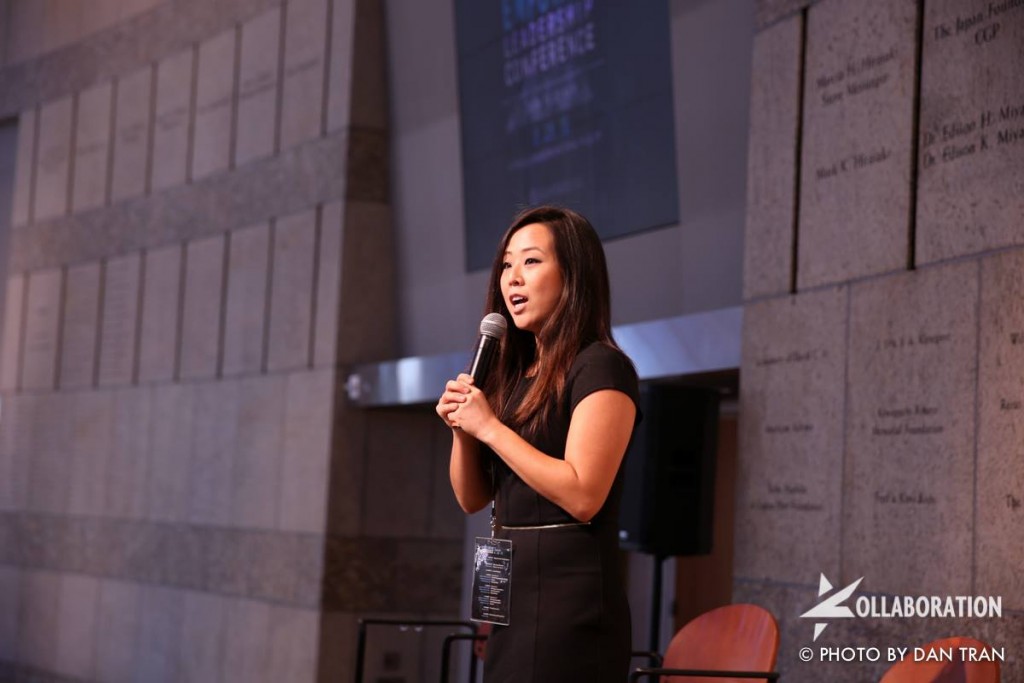 One thing became very clear as I sat in the audience listening to these stories. These panelists are just like us. They have hopes, dreams and fear. But the difference and why they were on the stage giving us advice was that they not only started somewhere, believed in something, and worked for/towards it. They tried and failed but kept going and lived, so to speak, to tell the story of what they created.

The fact is, you can do it too. You just have to find out what your voice is. Like Beau Sia, Tony Award winning poet and performer put it, “Thank G-d all of you are out there doing you and sharing your story. It’s all about getting together but honoring each person’s unique way.”

I don’t know about you but hearing things like this make me want to keep doing, keep dreaming.

Give yourself a pat on the back if you were there that Saturday like I was, and if you weren’t it’s ok, everyday is a day to begin again and…. Kollaboration has many more events to come.

This article was guest written by Andrea M, a New Yorker navigating her new home of Los Angeles one day at a time. You can find her personal blog at inbusinessandlife.com

Today marks the kickoff of Kollaboration’s new content strategy and starting this week, you can check back for regular blog and media content updates brought to you by the national Kollaboration teams! To commemorate this moment, we’ve cut a new “sizzle” reel for you all to re-introduce our programs. Come see what’s new, and we hope you’ll stay a while!

Kollaboration Executive Director Minji Chang invites you to Kollaboration’s inaugural EMPOWER Leadership Conference, taking place on Saturday August 29 2015 at the Japanese American National Museum in Los Angeles, CA. Join us for a day of inspiring keynotes and engaging panel discussions with some of the API communities brightest leaders!

Learn more and register at www.kollabempower.org

The Kollaboration EMPOWER Conference is an event where API youth & young professionals gather to learn directly from some of the community’s most inspirational professionals. At EMPOWER, attendees will be able to explore a variety of creative career paths, industries, and best practices to apply to making their dreams a reality. This unique experience will bridge communities, generations, industries, and innovative minds.

Learn from APA leaders and professionals at the top of their game. Topics and focus areas include media production, starting your own company, the relationship between arts & activism, switching careers, and more!

Take the opportunity to engage with inspiring leaders from the community in a small group setting.

Find out more at www.KollabEmpower.org and

END_OF_DOCUMENT_TOKEN_TO_BE_REPLACED

EA recently revealed that Bruce Lee will be a playable character in the upcoming UFC video game.  How has this news faired?  Controversial to say the least.

END_OF_DOCUMENT_TOKEN_TO_BE_REPLACED

Named a must-read by the New York Times, the Wall Street Journal and the Guardian, Kevin Kwan’s 2013 debut novel about a group of Singaporean elite, Crazy Rich Asians, is set to be adapted onto the big screen.

END_OF_DOCUMENT_TOKEN_TO_BE_REPLACED

Steven Yeun of ‘The Walking Dead’ will be executive producing and starring as a North Korean defector in a film adaptation of Kang Chol Hwan’s memoir ‘The Aquariums of Pyongyang.’

END_OF_DOCUMENT_TOKEN_TO_BE_REPLACED

Despite the growing number of Asian Americans in the rap and hip-hop landscape today, it’s still difficult to come by a female API artist in the industry. But if you do, you’ll undoubtedly come across the name Ruby Ibarra.